Suppressor Basics – What You Should Know

There’s a lot of information out there on the interwebs about suppressors, what they do, and the purchasing process. To be honest, not all of it is good. There are some fundamental pieces of knowledge that often get overlooked, so we’re here to share our take on the basics of suppressors with you.

What is a Suppressor?

A suppressor is a device that attaches to the end of your firearm and it suppresses the sound of the blast by redirecting the hot gasses that are expelled during firing. The gas is redirected by the baffles and therefore releases less sound out of the end of the firearm.

Rimfire, pistol, and rifle suppressors are three common types that you will come across as you start your NFA journey. They all have different configurations, specs, and materials. At the end of the day, the goal of every type of suppressor is the same thing; to disperse gas among the baffles inside of the suppressor allowing the gasses to slow down and cool, reducing the report and flash of the firearm. 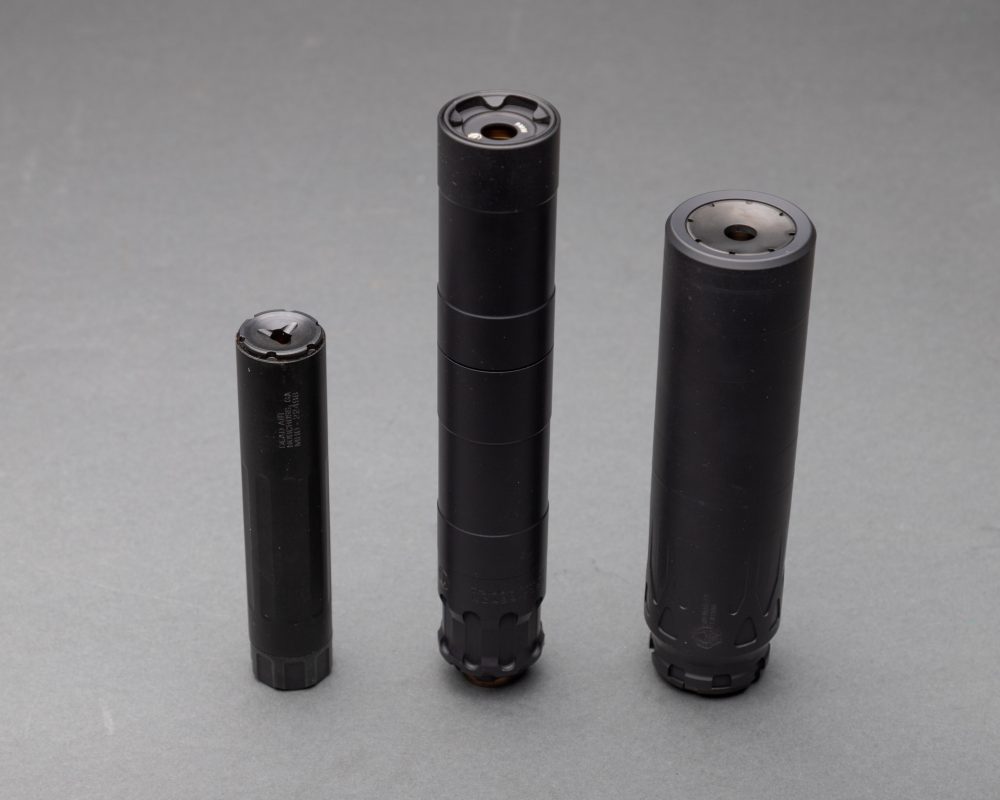 Rimfire suppressors tend to be smaller and lighter than most other suppressors because they deal with smaller, lower pressure, rounds such as 22LR, 22Mag, 22 Hornet, 17 HMR, 17 WSM, 5.7X28MM. They typically attach to the firearm by a direct thread. Since rimfire rounds tend to be lower pressure than standard handgun and rifle rounds, they are made of more lightweight materials.

Pistol suppressors are a little bit different because many modern pistols have a tilting barrel. Once you put a suppressor on the end of the barrel, it will have a rough time properly cycling due to the extra weight. The little guy will need some help when running suppressed to function properly.

This is why pistol suppressors have a Nielsen Device/booster system/piston system. It is a spring, piston, and suppressor end cap mechanism that is attached to the back end of the suppressor where the threaded barrel connects. It allows the pistol and the suppressor to work independently of each other so the pistol can cycle properly. Because of the reduced pressure of the round, pistol suppressors can often shoot subsonic 300blk ammo. Rad right? (Always be sure to check what your suppressor is rated for before shooting rounds through it).

Rifle suppressors are generally pretty simple. They’re made of stronger materials due to the pressure of rifle caliber rounds. They are usually made from stainless steel, aluminum, or hybrids of both. Rifle suppressors mount to firearms by directly threading onto the end of the barrel or though a quick detach that attaches the suppressor to a muzzle device. Because of the heavy duty materials, rifle suppressors will have more weight to them with the exception of titanium suppressors.

Most rifle suppressors made today will be .30 caliber – that means that they can shoot anything up to that bullet size. There are also big bore cans out there that can go all the way up to .45 caliber and .50 caliber. Other rifle suppressor sizes can also include .223/5.56, 6.8, and a variety of caliber-specific options.

In the suppressor world, there are two common applications for attachment types; direct thread and quick detach. They both have their pros and cons and will benefit the user depending on how they want to have their suppressors set up.

Direct thread suppressors will directly thread on the end of a barrel (shocker right?) using the threaded end of the suppressor. This makes it more difficult to swap between firearms, but it is still a great option. Most common rifle and handgun suppressors use this style of mounting because it is simple and efficient. Oftentimes, because this system is so simple, you end up saving money and weight because of the amount of materials and labor that aren’t needed in manufacturing direct thread suppressors. 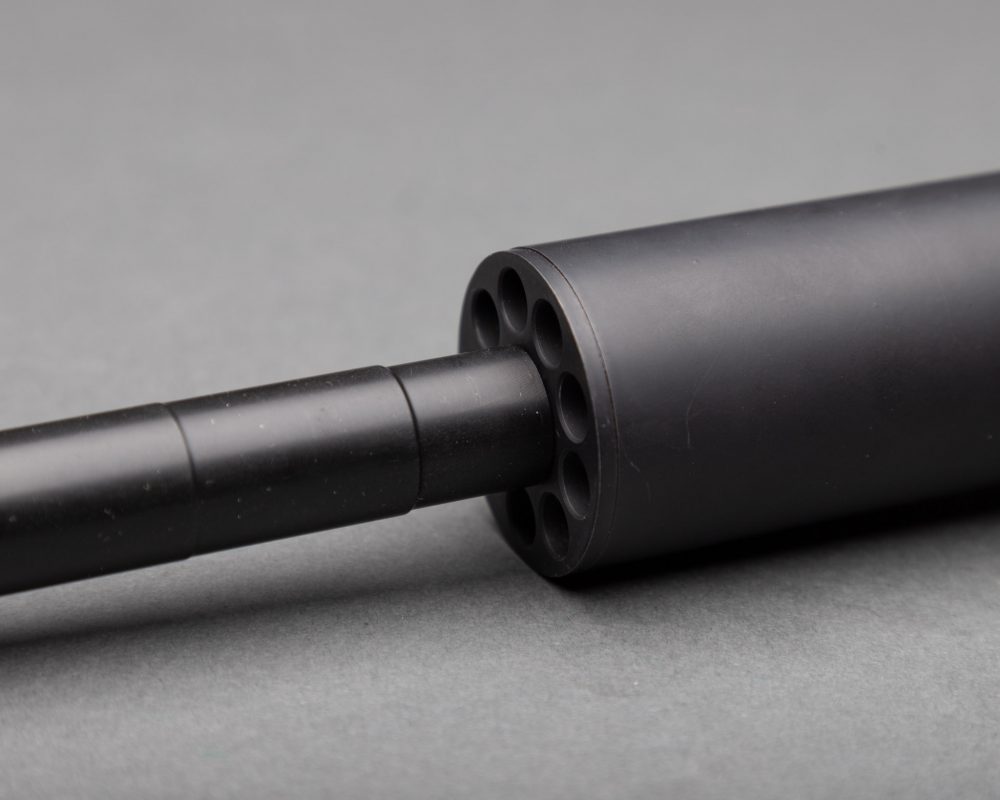 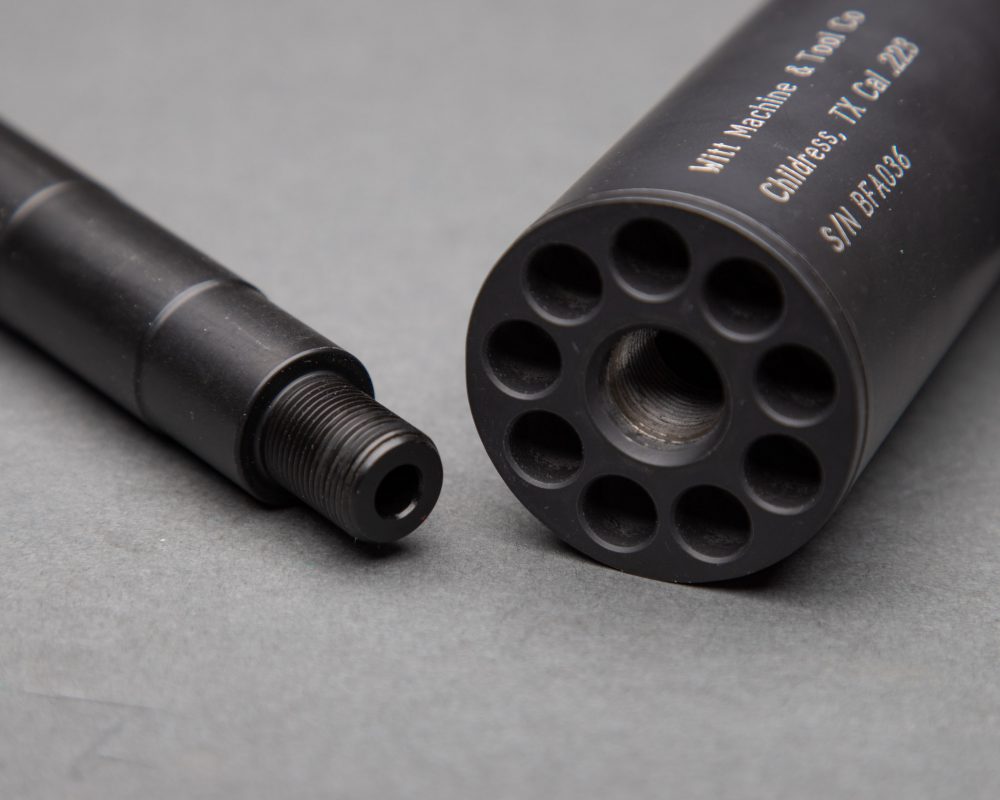 The QD attachment sometimes will add more weight to the back end of the suppressor, which may end up being a downside depending on your shooting style and specific application. For many shooters, the weight isn’t an issue. QD suppressors are some of the most popular cans on the market right now. Muzzle devices will vary between suppressors and their manufacturers because everyone has their own mounting system for their QD suppressors. 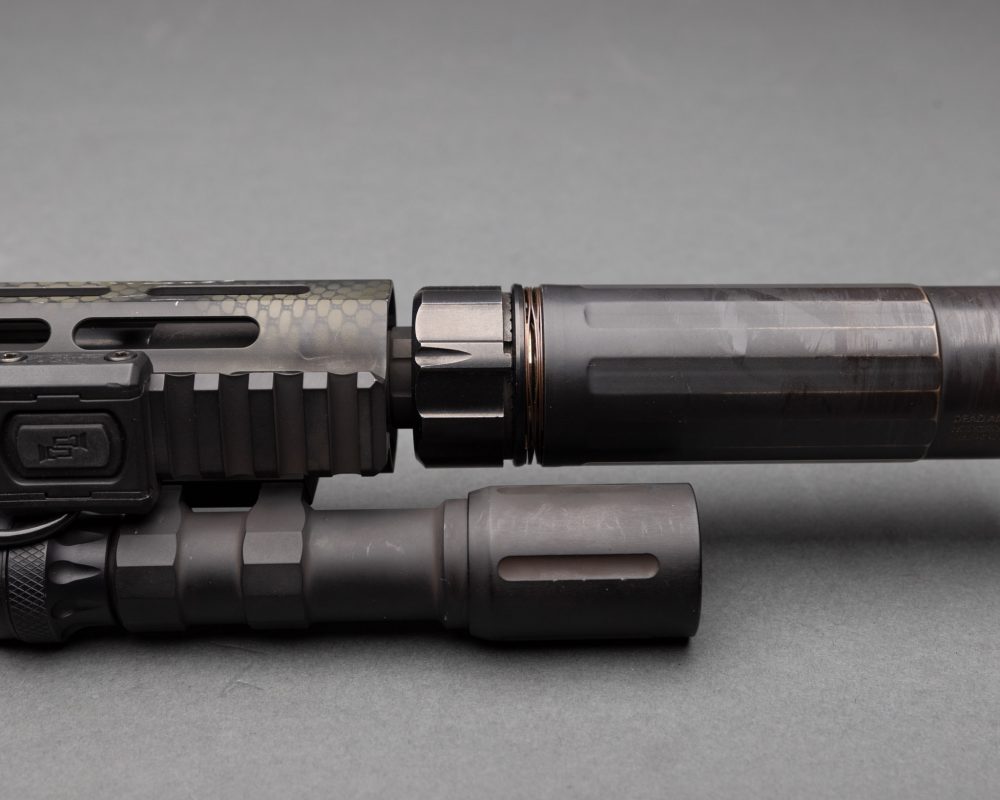 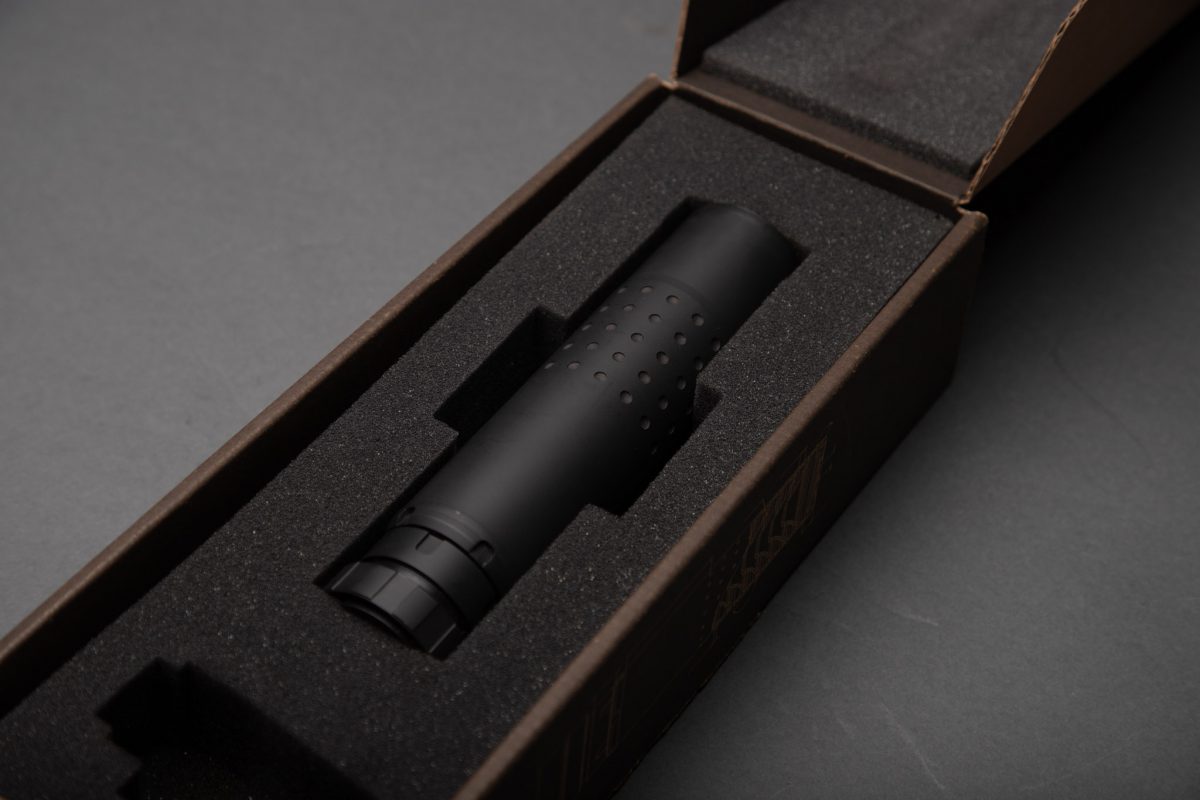 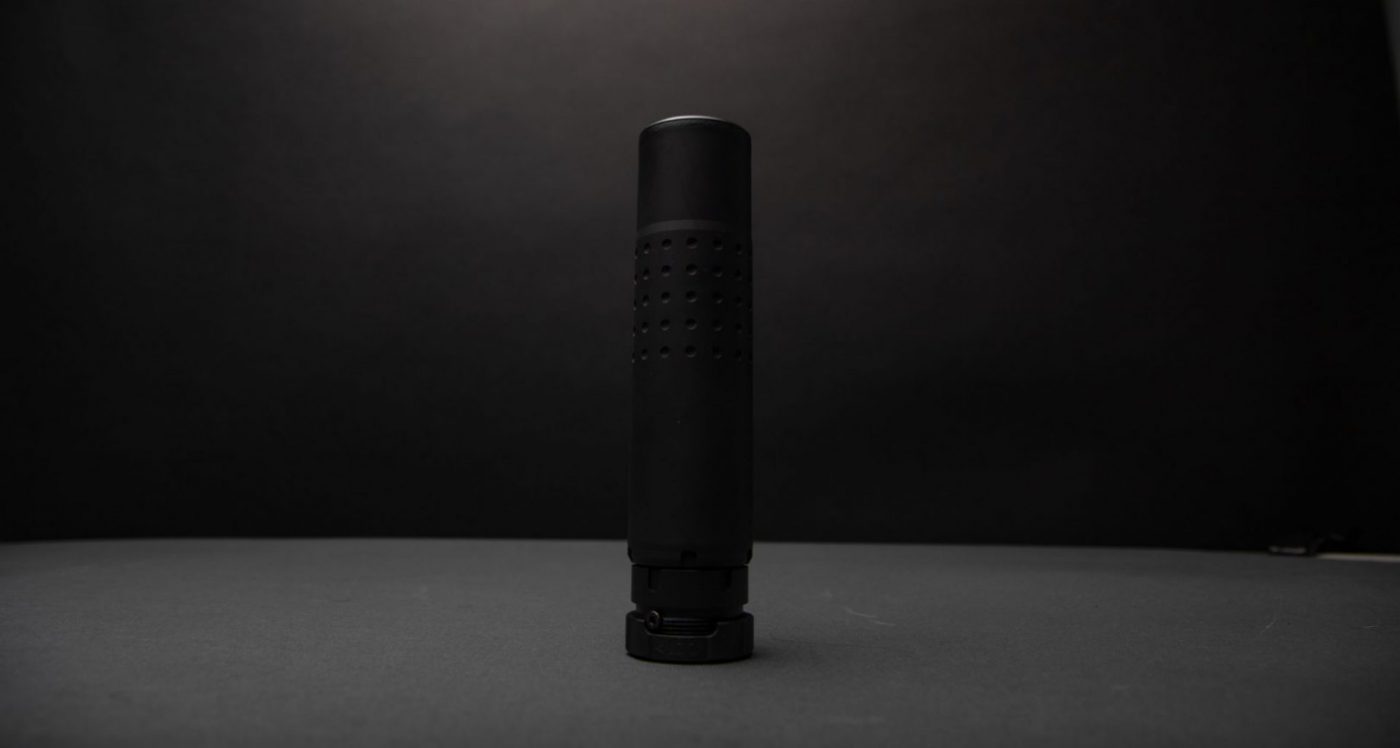 How do I Buy a suppressor?

Buying a suppressor is a lot easier than the ‘common knowledge’ of the internet and social media make it out to be. It is actually very similar to purchasing a firearm. Start out by picking out whatever suppressor you think will work best for your needs. You’ll pay for the suppressor and the shop will order it from one of their distributors. It then arrives to the shop after the Form 3 (dealer to dealer transfer) has been completed.

Once the physical suppressor is in the shop then you can start your Form 4 (dealer to individual transfer). At that point is when your waiting period starts as the ATF reviews your Form 4 paperwork. Right now, the typical wait times range from 6-10 months on average. You can check ATF average wait times below. When filing for a Form 4 there are two ways to complete the paperwork: by hand or with the assistance of the Silencer Shop Kiosk

The paper method of completing Form 4 requires all the paperwork and fingerprinting to be done by hand. This method is liable for error and can take a little bit of time to finish as it will will need to be checked over for accuracy before mailing it in to the ATF. Many shops will also charge a small fee to complete the paperwork due to the fact that it takes some time and assistance (exception: we don’t charge at all 🙂 ). After you have filled out all the required parts of Form 4, finish fingerprint cards and passport photos, you’ll then mail all the information and a check for $200 off to the ATF and you’ll begin the waiting game. 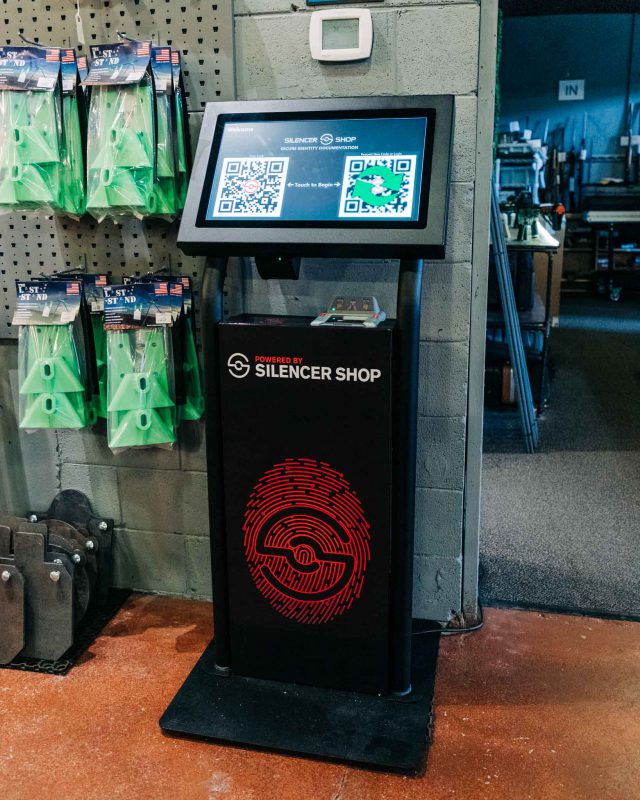 Our preferred method of filing form 4s is by E-filing with the SilencerShop Kiosk. This thing is a life saver. You enter all your required information, license info, fingerprints, it then directs you to an app to take a photo on your phone. The app will upload it to your profile when it’s done. After that, your shop will then assign the serial number of your suppressor to your account and SilencerShop will email you a Docusign link to sign your Form 4. Once you’ve paid your #200 for your tax stamp on SilencerShop’s website or at your Dealer, they will send your E-file Form 4 off to the ATF and you just sit back and wait for your approval. The only downside here is that some shops may not have a SilencerShop Kiosk available in their store. Before your purchase, check for a nearby SilencerShop Kiosk here:

Please note that if you E-file your form 4 at a kiosk, you will have to pick up the suppressor at the shop you used the kiosk at.

Now, when you want to purchase another suppressor, all your information will be securely saved in the SilencerShop Kiosk and all you’ll need to do the second time around is pay the ATF their $200, and once it gets assigned to your account you’ll only need to sign the Docusign email and your Form 4 is on its way. It’s that easy!

What Should be my first suppressor?

Buying your first suppressor may be intimidating, we get it. There are so many options choose from. For most shooters, we typically recommend looking into .30 caliber QD suppressor first because they will work with the majority of rifle calibers and will be easily interchangeable if you plan on using it across multiple rifles.

If you’d like something to use across rifle and pistol calibers, the hybrid .46 from Silencerco would be a safe bet because it will work with piston systems for handguns. It will also shoot everything from .22lr all the way up to 45-70!

From rimfire to .50cal and from $400 to $2000, we believe that there is a great suppressor within everyone’s budget and application. So get out there, pick a suppressor, and get started on your first NFA item. If you have more questions about suppressors or firearms in general, visit us at the shop or give us a call. We’re more than happy to help!